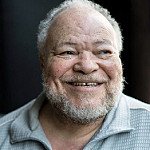 Henderson is known for his role as Arthur in the acclaimed HBO film, EVERYDAY PEOPLE. Other film credits include Lester in TOWER HEIST, Bobo in A RAISIN IN THE SUN, Cooper’s husband in the MARIE, and roles in the films KEANE and IF YOU COULD SAY IT IN WORDS. In addition to his films, Henderson played the recurring character, Omar, on the Fox series NEW AMSTERDAM, which premiered in early 2008.

Henderson is known mostly for his stage work. His portrayal of Jim Bono in the Broadway revival of August Wilson’s FENCES opposite Denzel Washington and Viola Davis, earned Henderson the Tony nomination for supporting actor and the Richard Seff Award, from Actor’s Equity. His other Broadway credits include: DRACULA, THE MUSICAL, DROWNING CROW, a revival of MA RAINEY’S BLACK BOTTOM, and KING HEDLEY II. Henderson is especially recognized as a veteran performer of August Wilson’s ouvre.

Off-Broadway, Henderson’s work includes originating the role of Turnbo in JITNEY, for which he won a Drama Desk Award, A RAISIN IN THE SUN, ZOOMAN AND THE SIGN and THE LAST DAYS OF JUDAS ISCARIOT, with the LAByrinth Theatre Company.

Henderson has also appeared on TV shows such as LAW & ORDER, LAW & ORDER: SPECIAL VICTIMS UNIT, LAW & ORDER: CRIMINAL INTENT, TYLER PERRY’S HOUSE OF PAYNE and THIRD WATCH.  His work as an actor, director, and educator is documented in the book, ACTING TEACHERS OF AMERICA and in the OXFORD UNIVERSITY PRESS AFRICAN AMERICAN NATIONAL BIOGRAPHY. Henderson currently teaches in the Department of Theatre and Dance at the University of Buffalo, NY.