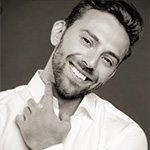 Anton Lapidus began his dance training as a professional ballroom dancer at the age of 6 in Russia. He continued his training after moving to Israel and received 2nd place in the Israeli Open championship Int.Latin division.  Anton then went on to compete on So You Think You Can Dance Israel and placed in the semifinals top three. Soon after SYTYCD, he appeared on the Israeli version of Dancing with the Stars. Following his success in Israel, he made an appearance on the U.S. TV show ‘ Royal Pains’ . Anton has also performed in  many musicals such as ‘Fiddler on The Roof’ and ‘Cabaret ‘. Anton currently resides in New York City as a Ballroom ProAm Dance instructor as part of NDCA Dance association . Dance Reel Here.