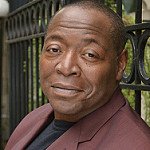 Chuck Cooper won the 1996 Tony Award for Best Featured Actor in a Musical for his performance in Cy Coleman’s THE LIFE, the AUDELCO Best Actor Award for CAROLINE OR CHANGE and the San Diego Critics Circle Award for August Wilson’s TWO TRAINS RUNNING.  He has ten Broadway shows on his resume, numerous Off-Broadway and regional Theatre credits.  His many film and television appearances along with detailed biographical information can be found at www.chuckcooper.net