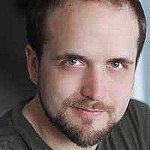 Jared Kirby has been involved in Western Martial Arts and Combat for Stage & Screen for 25 years. He teaches in New York City (and the metro area) and has choreographed fights Off-Broadway, Nationally, in London and Sydney.

Jared is a Fight Director with the Art of Combat merging his passion for historical fencing and his love of combat for stage and screen (which he teaches Fri nights in NYC). In addition to the Tom Todoroff Conservatory, he currently teaches fencing and stage combat at SUNY Purchase and is a Provost of Arms through the Martinez Academy of Arms in New York City. He teaches a variety of workshops across the US and around the world including Canada, England, Scotland, Finland, Italy and Australia and always looks forward to NYC Intensive Combat for Stage & Screen Workshop in NYC every year (www.artofcombat.org).

Jared has worked on production such as HAMLET, MIDSUMMER NIGHT’S DREAM, CYRANO, ROMEO & JULIET, MERRY WIVES, TAMING OF THE SHREW, COMEDY OF ERRORS, RICHARD III, THE ROVER, THE COMPLETE WORKS OF WILLIAM SHAKESPEARE (ABRIDGED), KING LEAR and THE THREE MUSKETEERS. Other memorable Fight Directing credits include COMPANY at the Lucille Lortel Theatre, HAMLET for the New Vic Theatre of London and an episode of THE DATING STORY for TLC. For a full list of credits visit www.jaredkirby.com.

Jared is the editor and one of the translators of “Italian Rapier Combat,” the editor for “The School of Fencing” by Domenico Angelo and most recently “The Gentleman’s Guide to Dueling” which was released in February 2014 and a reprint of Donald McBane’s “The Expert Swordsman’s Companion” released in January 2017. Most recently, Jared has co-authored “Staging Shakespeare’s Violence” with Seth Duerr and a 2nd edition of “Italian Rapier Combat” in 2021. For more information, see Amazon.com.