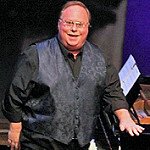 Mark started playing the piano in his father’s church in Oklahoma at age 9. His own musicals include: Rest In Peace directed-choreographed by Baayork Lee; A Midsummer Night, The Odd Ducklings, Apple Annie, a musical version of Damon Runyon’s short story Madame La Gimp with lyricist/librettist Don Loftus and Lillian Lorraine, a musical about the Life of Lillian Lorraine, the Ziegfeld Follies Star and 11 children’s musicals including Alice In Wonderland, Sleeping Beauty, Matchgirl, The Toy Shoppe, Treasure Island, Puff’s Magic Tail, Pinocchio and Heidi. His newest musical, Galveston! opened for a sold out run July 2003 in Galveston, Texas at The Strand Theatre and again sold out in Sept. 2011 at the Hobby Center in downtown Houston, TX. Mark is a native New Yorker from Oklahoma.